The first accused person, Uduak Frank Akpan, has pleaded guilty to the charge of murder as the trial began yesterday in the case of murder of Iniubong Umoren, a job seeker and graduate of the University of Uyo who was killed on 29th April 2021. The presiding judge, Bennet IllaUmoh ordered the accused and his father Frank Akpan to be remanded in custodial centre Uyo pending the commencement of the hearing.

Uduak Akpan pleaded guilty to the murder charge, which if convicted, carries a death sentence; but pleaded not guilty to the charge of rape which provides for life imprisonment according to section 367 of the criminal code laws of Akwa Ibom state.

On the other hand, the second accused frank Akpan, a retired deputy director in the Federal civil service pleaded not guilty to the one-count charge of accessory after the fact of murder, for allegedly assisting his son escape from his residence in Nnung Ikono Obio Uruan, where the Oruk Anam born graduate of philosophy was killed while on a job hunt.

The father and son are being charged by the state in a suit number HU/18/C/2021. The prosecution team led by the attorney general of Akwa Ibom state and senior advocate of Nigeria, Uko Udom, had earlier applied to the court for the amendment of the section of the particulars of the offence to remove the clause that stated that the accused person Uduak Frank Akpan did kill Iniubong Umoren, and replace it with the word “murder”, an application that was granted by the court.

Earlier there was a mild drama in the court when the Uduak Frank Akpan was asked about the whereabouts of his lawyer. He mentioned the name of his father’s lawyer, who denied representing him in the case. The lack of legal representation prompted the court to appoint a lawyer from the legal aid council of Nigeria, to give the accused person the constitutional right to a fair hearing in line with the provisions of the law. 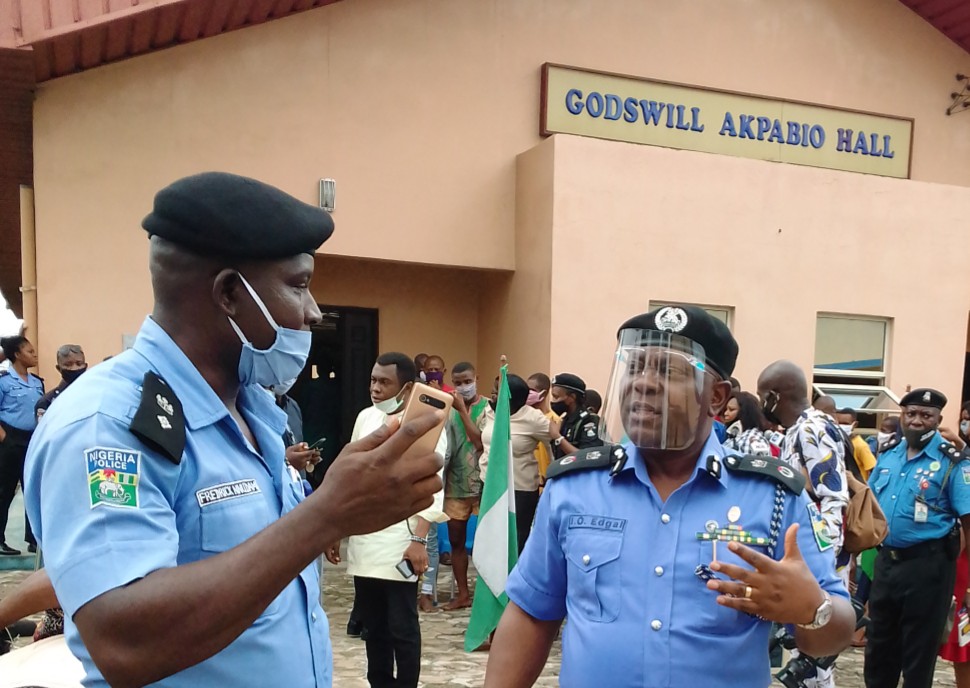 Indications have emerged that Akwa Ibom State Police Command might have short-changed their officers and men in the payment of COVID-19 duty allowance.

Already, there is subtle unease at the headquarters of the Command in Ikot Akpan Abia as some affected officers and men are bitterly complaining about the issue.

Our investigation showed that police officers who were deployed for lockdown enforcement duties in the state were paid between N500 and N1, 000 as special duty allowance.

These were indicated in credit alerts (SMS) received by the officers

The amount covered the over two-month period the operatives worked round the clock to ensure compliance with the government’s COVID-19 lockdown order.

The payments were transferred to all the beneficiaries from a private account named ‘ONIME’, to all officers who submitted their account details for the payment of the COVID 19 enforcement allowances as directed by the state police command.

Governor Udom Emmanuel had on April 2 in a statewide broadcast ordered the lockdown of the state as part of measures to stop the spread of the virus after the confirmation of five index cases of the infection in the state on May 1.  He later extended it by seven days on April 16.

HOW THE PAYMENT CAME ABOUT

There came a directive from the state command that all officers should supply their account details within 24 hours for payment of allowances for the lockdown enforcement duties.

Prior to this directive, there were conjectures that the state police commissioner had received an undisclosed amount of money from the government for payment of allowances to officers and men deployed for the enforcement duties and that the money might have been misdirected by the police hierarchy in the state.

Soon after the speculation went viral following complaints by some aggrieved officers, the directive came from the state Command asking officers to supply their account information for the payment.

It has however been revealed that not all officers who took part in the enforcement duties and who had supplied their account information as directed have been paid as some of the policemen said they were still expecting theirs.

Meanwhile, following the development, a civil rights organization, COMPART Foundation for Justice and Peace Building has asked the Commissioner of Police, Akwa Ibom State Command, CP Imohimi Edgal, to release details of monies and physical items received by the Command from the government, organizations as well as individuals’ donations during the period of the implementation of the COVID 19 lockdown directive in Akwa Ibom State.

The organization stated that it had received various complaints from policemen deployed on enforcement duties across the state during the restriction about poor welfare of men and officers engaged in the exercise.

The state Commissioner of Police, the organization said, ignored the freedom of information request sent to him to explain the issue.

The Executive Director of the organization, Saviour Akpan, explained: “Personally, I’m the State Focal Person for monitoring the conduct of security forces deployed to enforce the lockdown role during the COVID 19 Pandemic. That gave me a responsibility   to go out of my office to the street with my pass to check things.”

“And within the first two weeks of that period, I discovered that policemen were deployed on the road without facemask. What I did was to send a text to the Commissioner of Police and said these your men were performing but were not wearing facemasks as recommended. It was as if the policemen were immune to the pandemic.”

“He deliberately and flagrantly refused to answer the letter. So if he had received the money, there is nothing wrong by saying I received, it was used for this. If you didn’t receive, you say you didn’t receive anything. Suddenly we heard from some policemen that the Commissioner of Police asked them to submit their account numbers. Few days later, the Commissioner of Police had the mind to send N500 only to police officers serving in Akwa Ibom State. The question now is, if there was no money given to you, where does this N500 come from?”

The organization believes negligence of officers’ welfare while on essential duties has further fueled corrupt practices among policemen on the roads while also causing them to behave aggressively when interfacing with members of the public.

“The worst part of it is that when these policemen are not happen, they transfer that aggression on members of the public. And that is why we are saying that the current police leadership in Akwa Ibom State is encouraging police/community antagonism because when these people go and stand under the sun and if it is their right to be entitled to any allowance and probably they hear that the allowance has been given to their oga and the oga has not given it to them, they now force members of the public to pay. Right now in Akwa Ibom State, people who don’t wear facemasks are being forced to pay up to N2000,” Akpan stated

The COMPAART Executive Director said he has sent a petition to the Inspector General of Police, IGP Muhammed Adamu, seeking immediate transfer of the Akwa Ibom State police boss for not being accountable in managing funds and resources provided for the ‘logistics’ of police officers in the state during the lockdown enforcement.

It accused the Akwa Ibom State Police Commissioner of not promoting accountability and transparency in running the affairs of the Command.

But the state police Command said it will not respond to COMPAART’s allegations, stating that since the organization has purportedly submitted a petition to the IGP, the decision of the IGP should be awaited on the matter.

CP Edgal, the State Commissioner of Police also did not reply to SMS seeking his reaction on the issue and did not take his calls to explain.

The State Coordinator of the National Human Rights Commission (NHRC), Tony Ijih, while reacting to the issue said although the Commission has not directly received any complaint from any from any security personnel alleging lack of welfare or payment of any entitlement, its monitoring officials had observed that security personnel on essential duties were not using personal protective equipment (PPEs) at the initial stage of the lockdown but later did.

He explained “the Commission has not directly received any complaint from any security personnel alleging lack of welfare or payment of any entitlement.

“However, the situation improved subsequently with sensitization, thanks to the media. I think at some point, each of those security organizations eventually had branded facemasks. But generally speaking, from our observations, the welfare of security operatives was grossly inadequate. These are people that enforce the lockdown regulation. And we think as essential service providers, whatever government gave that was meant for them should be made available to them.”

“And then heads of security agencies and indeed everybody in the position of responsibility must be transparent. And if there is a request which comes by way of citizens’ action through FOI request, I think it is good to be transparent by availing citizens of such information to avoid speculation.”

The Chairman of the State COVID 19 Response Team and Secretary to the State Government, Dr. Emmanuel Ekuwem, when contacted, could not reply to a request to state how much was allocated and given to the police and other security agencies during the lockdown enforcement.

However, the State Governor, Udom Emmanuel has said repeatedly during media briefings on the COVID 19 response in the state, that the state government would subsequently compile list of items and funds received from donors for the purpose of fighting the pandemic, stating that it was needless to publish names of the various donors when more donations were still being expected, so as to not leave out some donors.

It has been the same with the state’s expenditure in tackling the virus since the index cases were recorded. It is not therefore known the amount donated by the government to the state police Command either as logistics for their operations or for payment as welfare allowances to the officers.