Akwa Ibom state Governor Udom Emmanuel has reassured the people of the state of his commitment to building on the economic and political foundations of past leaders of the state in order to move the state forward.

Speaking during an interdenominational thanksgiving service in celebration of Akwa Ibom at 33 and Nigeria at 60, with the theme “Remember me o lord” , held at the state banquet hall, government house, Uyo,  Governor Emmanuel who noted that the number 33 was significant, thanked God for keeping the state safe and expressed optimism that the state will celebrate its golden jubilee in peace, riches and abundance.

Governor Udom Emmanuel further appreciated the founding fathers and past leaders of the state for their various contributions which has imprinted socio-economic development and infrastructural transformation in the state.

Government house correspondent Jane Uwa reports that the Governor used the occasion to warn politicians against heating up the polity over his expected successor and stressed that his concern was on providing good governance to deliver on his completion agenda.

Akwa Ibom State State Governor, Udom Emmanuel, has charged agencies responsible for data generation in the country to always come out with reliable data that can aid the country in planning purposes.

Governor Udom Emmanuel stated this in reaction to the recent report of the National Bureau of Statistics- NBS, which had put Akwa Ibom as the second state with the largest number of unemployed persons.

The governor, who was speaking on an interactive media chat, noted that the figures were politically motivated and challenged the NBS to a debate on the modalities used in arriving at the figures.

According to him, the state is one of the areas with high foreign direct investment, coupled with rapid industrialisation policy of the administration leading to the establishment of many factories, investment in development of infrastructures, revolution in the agricultural sector, which has led to the creation of many jobs and wondered where the NBS took their data from.

On the Corona Virus Disease situation in the state, the governor said over five thousand persons have been tested in the state and expressed happiness that the number of positive cases were reducing.

The governor said schools in the state will open for academic activities as soon as the federal government gives the go ahead and expressed satisfaction at the level of compliance to the COVID 19 protocols by students and teachers in the state.

Government house correspondent Jane Uwa reports that Governor Emmanuel uses the occasion to caution some Akwa Ibom people especially those in different position of authority against inciting statements that are capable of causing disunity in the state.

Akwa Ibom State Governor, Udom Emmanuel has approved a review of the subsisting curfew to start from  10pm to 6am daily with effect from Tuesday, August 4.

The approval was comfirmed in a statement signed by the Secretary to the State government and Chairman, Covid-19 management committee, Emmanuel Ekuwem.

According to the statement, the governor also approved the re-opening of hotels and leisure centres in the State and urged them to ensure strict compliance with the COVID-19  guidelines  and protocols that are  applicable to the  hospitality and allied services operations. 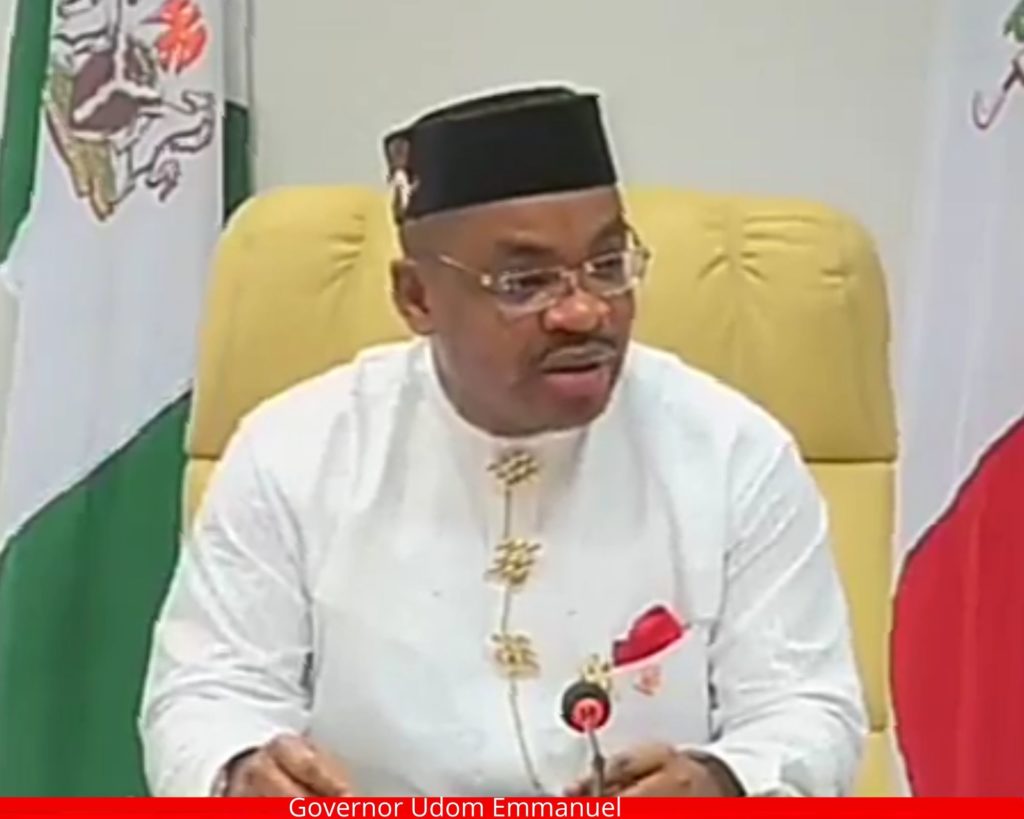 Akwa Ibom State Governor Udom Emmanuel has announced the lift of ban on funeral and marriage ceremonies within the state, effective Saturday, July 4 this year.

Governor Emmanuel who announced this during a live interactive media chat however stressed that the guidelines approved by the Christian Association of Nigeria-CAN must be adhered to, adding that for elaborate outdoor funeral ceremonies, space for social distancing, provision of hand washing items with sympathizers wearing facemask and not exceeding fifty must be maintained, while indoor funerals should also observe the protocols but with thirty persons in attendance.

On reopening of schools, the Governor disclosed that arrangement has been made to decontaminate schools, and that relevant agencies are exploring conditions for possible safe resumption.

According to the Governor, the state government is more concerned with saving the lives of Akwa Ibom people than controlling the spike in number of cases and has taken responsibility to test and treat indigenes with the COVID-19 disease once the person finds his way into the state.

While stating that the twenty percent slash in salaries are for political appointees, Governor Emmanuel however stressed that the 6am to 8pm curfew remains in force and ban on livestock market operations has not been lifted. 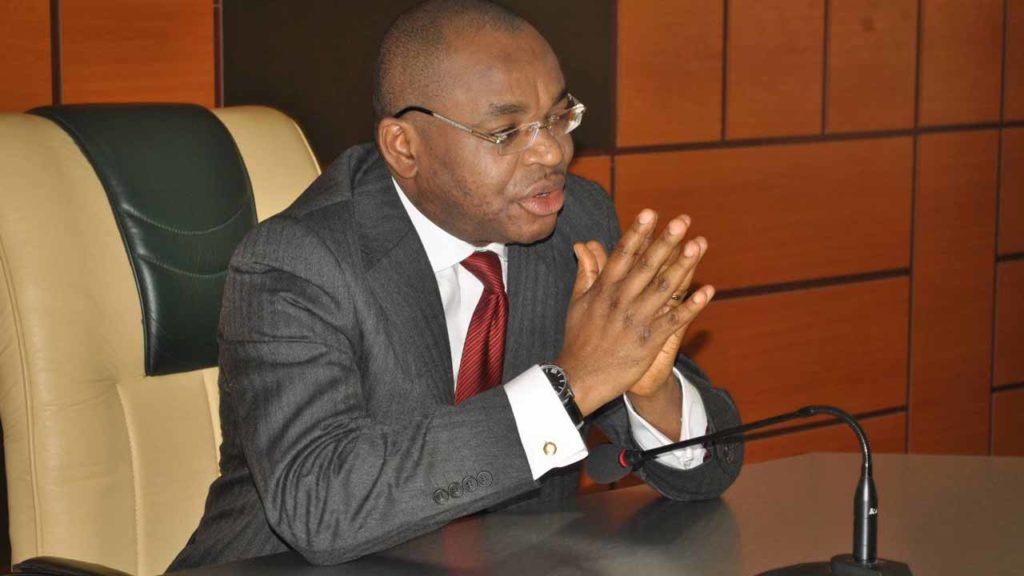 Granting the amnesty, Governor Emmanuel who was represented by the state Attorney General And Commissioner for Justice Barrister Uwemedimo Nwoko, said that the pardon is premised on the recommendation of the state Advisory Committee on Prerogative of Mercy.

Akwa Ibom State Government has announced that the Lock down order will continue till Monday April 27 when it will update the people on the order.

The secretary to the state Government, Doctor Emmanuel Ekuwem who made the announcement during a press briefing on the covid 19 update in the state said there was need to continue the lockdown, in view of the critical situation in the state and the nation at large and in order to ensure the continuous safety of the people

While imploring the healthcare professionals to do all they can, to protect themselves, the state government also advised them to avail themselves of the facilities provided by the government to handle the Covid-19 pandemic and other medical challenges.

He used the opportunity to call on people who do not really need the palliatives provided by the state government to cushion the effect of the lockdown order to steer clear of the items and allow those who truly need them to have more for themselves.

Our correspondent Jane Uwa reports that Doctor Ekuwem again reiterated that the government has initiated a novel idea titled “School on radio” to help students prepare for their final examinations in the junior and secondary schools since the  covid 19 pandemic has altered the academic programmes of various academic institutions around the world.

Akwa Ibom state Governor Udom Emmanuel has advocated the need for Good parenting and proper educational foundation for the people as part of measures to reduce crime rates in the country and decongest correctional service centers across the nation.

Speaking when he declared open a retreat of the presidential committee on correctional service reforms 2020, held at the Ibom hotels and Golf resort, Governor Emmanuel stressed the need for funds to be channeled for educational grants and youth empowerment as this will enhance proper educational foundation rather than for the establishment of more correctional centers.

While assuring that his government will play its role in reshaping the characters of pardoned inmates to ensure proper integration into the society, the Governor further stressed the need for correctional service reforms to put into consideration the environment inmates are kept in as it affects their behavioral pattern.

He however used the occasion to announce that the state government has signed a new contract with icon group to change the face of the Ibom hotels and Golf resort to a private sector driven hotel in order to enable them run a competitive business that will be profit driven.

Government house correspondent Jane Uwa reports that earlier the chairman of the committee and chief judge of FCT, Justice Ishaq Bello had said the aim of the retreat is to ensure the reform of correctional service centers and align it with international practice, adding that there was need for government to adopt the non-custodial correctional template, to ensure that not everyone convicted goes to correctional facilities in order to enhance the decongestion of correctional centers in the nation.

Akwa Ibom state governor Udom Emmanuel has announced plans to incorporate Widows of the Nigerian Legion in the state into the various empowerment programmes of the state government.

Governor Udom Emmanuel who made the announcement during an inter-denominational Thanksgiving service to mark the 2020 Armed forces remembrance day celebration held at Word Tabernacle, Uyo, commended the efforts and contributions of the past and fallen heroes to the growth and promotion of peace and unity in the country and pledged his government’s resolve to continue in supporting the Members of the Nigerian legion.

In her address, Commissioner for women affairs and agriculture, Doctor Glory Edet thanked the Governor for his love towards the Nigerian Legion and the armed forces and for making their welfare his priority.state.

In her address, Commissioner for women affairs and agriculture, Doctor Glory Edit thanked the Governor for his love for the Nigerian Legion and the armed forces and for making their welfare his priority.

Earlier, the State Chairman Nigerian Legion, retired Colonel Joseph Esu thanked the Governor for the support given to them so far and prayed God to bless and prosper his administration.

Government House correspondent Jane Uwa reports that the high point of the event was the Intercessory Prayers offered for Akwa Ibom State and Nigeria, the Governor and Arms of Government and Prayers for the Armed Forces, Nigerian Legion and families of the fallen heroes.

The Court of Appeal sitting in Calabar has upheld the victory of Governor Udom Emmanuel in the March 9 gubernatorial elections in Akwa Ibom State.

READ ALSO:Residents of Uyo decries FG’s plan to regulate use of social media in Nigeria.

The Appeal was filed against the judgment of the lower tribunal delivered on September 5 in Uyo which dismissed the All progressives Congress candidate, Nsima Ekere’s petition for wanting in merit.


Delivering judgment in the Court of Appeal, the five-man panel gave its judgment on all the issues set out by parties in the appeal.

Akwa Ibom State Governor Udom Emmanuel has promised to award a contract for the construction of an ultra modern Police station in Nsit Ubium local government area in order to boost the security Architecture in the area and ensure the protection of lives and properties.

Governor Emmanuel who made the pledge during his Gubernatorial campaign rally in Nsit Ubium, also assured the people that the next human driven foreign investment to be attracted to the State will be cited at Nsit Ubium. In Etinan local government area, the Governor sued for continuous support for the PDP to enable him do more for the people of the area.

Earlier in their speeches, the Director General of the Divine Mandate campaign organisation, Otuekong Idongesit Nkanga and the state chairman of the PDP, Obong Paul Ekpo, expressed optimism that Governor Emmanuel will emerge victorious in the polls owing to his record of superlative performances in the last three and a half years.

In their goodwill messages, the people of Nsit Ubium and Etinan local government areas who lauded the Governor for the landmark achievement recorded in the areas, including the renovation and revamping of the general hospital, Etinan institute and road projects amongst others, stressed that the massive investments and life touching projects across the state has given them the conviction that the Govenor deserves their support for a second term in office.

Government House correspondent Jane Uwa reports that the event which also featured presentation of flags to candidates of the PDP while the governor consulted paramount rulers of both local government areas on his re-election bid.